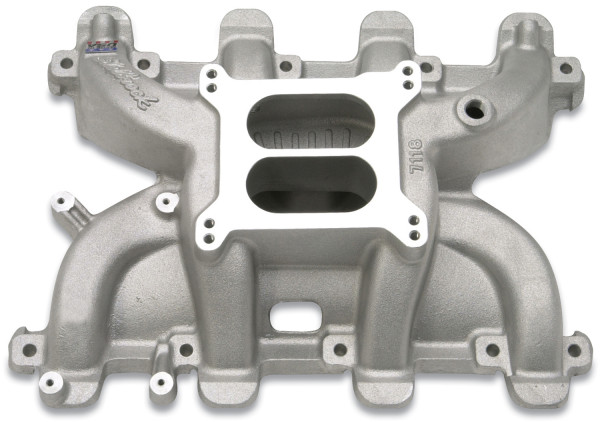 Edelbrock Part # 71187 Performer RPM LS1 intake manifold is designed for the popular Chevrolet LS1 (5.7L) small-block V8 originally used in 1997 and later Corvettes and 1998-02 Camaros and Firebirds. It also fits the Corvette LS6 engine and any other Gen III engine including the LM7 (5.3L), LR4 (4.8L), and LQ4 (6.0L). It allows the use of a carburetor on these originally computer-controlled engines, offering maximum power and a broad torque curve from 1500 to 6500 rpm. The Performer RPM LS1 is available with an optional wiring harness and electronic Timing Control Module made by MSD® this ignition module is for LS1 (24x) ignitions only and works with OE sensors to fire the Coil-on-Plug ignition system and offers a choice of six timing curves (sold separately). A special throttle and trans bracket that works with 700R-4, 200R-4 and Turbo 350 transmissions is included, making the LS1 engine an easy retro-fit into any muscle car, street rod or marine application.